a “genius of fashion” 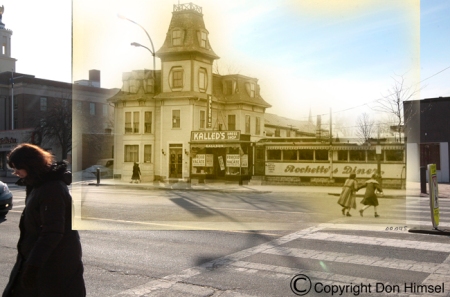 Editor’s Note: Imagine Nashua: Then & Now is a weekly photo column by Don Himsel. Each week, he will feature an old photo within a more recent photo and an explanation of how he got the shot.

Threads of every imaginable type come together to make up the fabric of Nashua’s history. The thread that tells the story of the Kalled family winds tightly, looping and pulling together distant countries, common values and timeless concepts of perseverance and dedication.

Holding one end of the thread is Philip Walker, who talked with me at length from his Ossipee home about the Kalled’s ties to the city. Walker began tracing a long path and took me back to when his grandfather John Kalled came to the United States as a teenager, around the turn of the last century.

“A large part of the Lebanese of that generation went into dry goods, selling door-to-door,” Walker said. “They’d stake out a territory, buy wholesale goods from the old garment district around Kneeland Street in Boston and go from there.”

“When he first started out, he went door-to-door with a pack on his back, selling fabric things – needle, thread. He graduated to a horse and cart, then saved enough money to buy a car,” Walker said of his grandfather.

“That store was started by my grandfather and his wife Nasimi,” Kalled said. “They were both full-blooded Lebanese. They met here and they came through Ellis Island.

“My grandfather was a traveling salesman, selling ladies’ lingerie. He did it door-to-door all over the state. He drove all the way up to Coos and northern Carrol County in his old Ford coupe.”

Walker said the storefront became a natural growth of the business.

“Years after he retired, he had people reminding him about his visits to their home as a traveling salesman,” Walker said.

“While my grandfather was on the road selling, my grandmother minded the store,” Kalled said. “She was a very popular lady in Nashua. People adored her. My grandfather was not literate. He couldn’t read or write English. He could speak it, but he had a thick Arabic accent. Her English was more polished.

“He ran it into my childhood.”

The store was relocated in the late 1930s to make way for the First National food store and moved to West Pearl Street.

All the Kalled boys, five in all, fought in World War II and all returned home, which was not often the case. The Kalleds fought on D-Day in France, at Anzio in Italy and throughout the Pacific theatre from Guadalcanal through Okinawa at the end of the war. Brother Jacob even earned a Silver Star for his efforts.

Safely back home, Kalled said his grandfather continued the shop until he turned it over to his oldest daughter and Walker’s mother, Vivian. She changed the name to Vivian’s and the shop transformed into a downtown icon, offering cosmopolitan fashion to discerning women throughout northern Massachusetts and New Hampshire.

Walker described his mother as “a genius of fashion. She was an absolute genius because she could tell what looked good and what didn’t – and was quite blunt about it.

“Women respected her opinion,” he said.

Hers was always the first shop in northern New England to have what was new in New York City.

Several times a year, she’d change the storefront to reflect the latest trends. She would organize fashion shows in Nashua. After her New York trips, she’d get on the phone and call her regular customers.

“She’d tell them ‘I just ordered a dress from Liz Claiborne. I bought it with you in mind. It’ll look fabulous on you,’ ” Walker said.”Ninety percent of the time they’d come down and buy it.”

Vivian’s thrived in the 1960s and 1970s. Several factors added to its eventual decline, said her son. He said part of what brought down the beloved shop was the accessible higher-end fashions moving to the mall stores. One thing for certain was Vivian’s love for downtown. “She’d always say, ‘West Pearl Street was a gem. It was our Newbury Street in Boston,’” Walker said.

Carrying on the downtown retail tradition into another century, Vivian died Sept. 25, 2001. The end of her obituary read “If asked how best to honor her memory, Vivian would have said, ‘shop downtown Nashua, especially West Pearl Street.’”

This photo was taken of the spot where Kalled’s settled after its beginnings as a traveling operation started by patriarch John. It was on the west side of Main Street. There’s a parking lot there now and it’s near the Persian Rug Gallery. Rochette’s, too, is long gone, as is the Red Arrow, another diner that operated there before it.

Walker said a good business sense passed along through all that time from his grandfather through Vivian.

“Work hard, keep at it,” he said. “I know during The Depression, my grandfather was at a time at the edge of bankruptcy and destitution.”

Walker talks of his mother, too, weeping because of a lack of customers soon after taking on the shop in the ’50s. But she never gave up, he said.

So, Kalled’s may be gone and Vivian’s is now shuttered, but the threads of commitment, perseverance and love of the city have never frayed for the family, who still owns and maintains buildings on West Pearl.

Walker talks about the now-empty space. “Frankly, I’ve thought of opening another (dress shop) if I could find someone.”