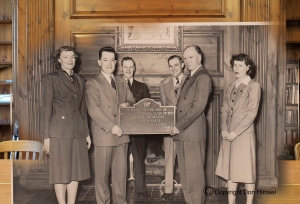 The Nashua High School class of 1939 included many well-known Nash­uans – Bernie Pastor, Herbert Miller, Phil Labombarde, Louis Daukas and others who you can’t help but mention when talking about Nashua’s mid-century boom. These folks made their mark on Nashua in a big way.

Having turned an age that made them ideal for military service by Dec. 7, 1941, many in the class served. Several died.

The men and women returned home from the fight and re­aligned themselves with the cadence of civilian life. The war had interrupted the usual custom of holding a five-year high school reunion, so the class – only the third to have graduated from their build­ing, which is now Elm Street Middle School – had their first in 1947.

A group met at the Howard John­son’s on June 27. It was at that gather­ing the decision was made to find a way to praise their fallen friends.

A year after that, on March 16, a photo appeared on Page 3 of The Nashua Telegraph. The image came to me courtesy of Janice Brown, the editor of the cowhampshire blog.

“Six members of the Class of 1939 who lost their lives in the last World War were honored by their classmates with this plaque, which is shown being presented to Headmaster Edmund Keefe at appropriate exercis­es yesterday. In the group were: Ethel Bilodeau, Frank Richardson, Harry H. Kleiner, Robert Connors, Mr. Keefe and Rita Sughrue.”

“Mr. Keefe, on behalf of the mem­bers of the class of 1939, I wish to pres­ent this memorial plaque to the Nashua Senior High School, to be permanently emplaced in an appropriate position within this building for the purpose of perpetuating the memory and to serve as a lasting tribute to those members of our class who sacrificed their lives in World War II.”

In accepting the plaque, Mr. Keefe said. “President Frank and members of the Class of 1939, I am very happy to accept this plaque in memory of the members of your class who gave their lives in World War II in the service of our country. I can think of nothing more fitting than a memoriam here at school to keep alive their spirit in the minds of their classmates.

“On behalf of the faculty and myself, I can assure you that this plaque will be displayed in a prominent place in the school so that future pupils may realize their duty to their State and Country.”

The plaque’s six names (one being Paul Boire, namesake of Boire Field at Nashua Airport) include that of Army Air Corps 2nd Lt. Leroy Rigney.

Rigney was the pilot of a B-17 bomb­er in a group of 31 planes (of a much larger group) on a mission to bomb an industrial target over Sofia, Bulgaria, on March 30, 1944.

According to a unit account, one of the bombers didn’t make a wide enough turn as they approached the target. It was caught in the prop wash of another plane, lost lift, and crashed on top of Rigney’s bomber 35 miles west of Sofia. ­

“Metal crunched against metal and power­ful propellers dissected airframes. In moments, the air that held the stately forms of two sleek airplanes, was strewn with the jagged debris of death and destruction. The two planes were town apart, but there was no explosion or fire on impact, even though they carried 500-pound incendiaries.

“One whole tail section and one whole wing were seen to fall away, and only one parachute was seen to open.”

The report stated people of “Kosbarevo” buried the dead fliers in their local cemetery.

So the rest of the class, who would today be in their 90s, have perservered. They most certainly have been wit­ness to much, beloved by many, generous in spirit and gracious to those they’ve loved and lost; paticularly, six others who made their mark on Nashua in a big way:

Today, the plaque hangs in the lobby of the audi­torium named for Keefe. Custodian Jerry Landry was kind enough to show me where it was, even giving it a quick dusting before I arrived. This after Cail Bellavance, Denise Rock and others at the school and district of­fice helped me locate it.

On the 25th anniver­sary of their commence­ment, one member of the class of ’39 wrote in The Nashua Telegraph ” … you will find that six of our most vital person­alities paid the supreme sacrifice – a large number for any group the size of our graduating class. For this we claim no distinc­tion – but their sacrifice we must remember – the distinction belongs to these boys alone whom we hold in reverent memory.”